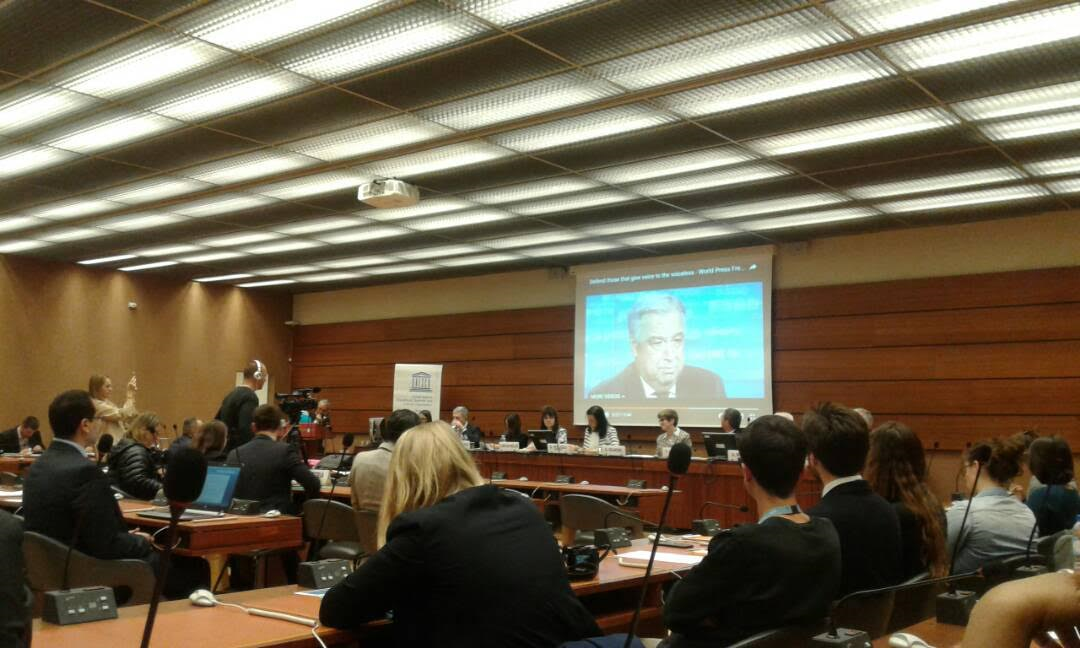 H.E. Ms. Sabine Böhlke-Möller, Ambassador and Permanent Representative of Namibia to the United Nations Office and other international organizations in Geneva highlighting the history of Namibia and its significance in relation to world press freedom day.

The Permanent Mission of Namibia to the United Nations at Geneva was invited by UNESCO to participate in a panel discussion on Wednesday, 3 May 2017, to celebrate the 24th year of World Press Freedom Day. Under the theme Critical Minds for Critical Times: Media's role in Advancing Peaceful, Just and Inclusive Societies, the panel discussion focused on the safety and freedom of expression for media practitioners worldwide, while celebrating the hard work of journalists and publishers in providing access to information.

H.E. Ms. Sabine Böhlke-Möller, Ambassador and Permanent Representative of Namibia to the United Nations Office and other international organizations in Geneva, highlighted the importance of World Press Freedom Day and gave background on its origins and its profound connection to Namibian and African press.

Established in 1993 by the United Nations, World Press Freedom Day was born after the events of 1991’s Declaration of Windhoek, which called for independent and pluralistic media amongst African journalists and media houses. This in turn led to the formation of similar global declarations all in the pursuit of seeking value in the freedom of expression, thus changing the media landscape leading into a golden age of journalism in the 1990s.

This year’s World Press Freedom Day was celebration was marred by the current trend of violence experienced by journalists globally. In the last decade alone approximately 827 journalists have been killed worldwide, where others are currently being held hostage and many others are still missing.

According to Member of the European Parliament and panelist, Stelios Kouloglou, reminded those in attendance that violence was not the only threat to journalism, citing the rise of robot (technology automated) journalism and fake news (via social media) as professional road blocks.

Furthermore, the surveillance of journalists, targeting of whistleblowers, censorship, intimidation and physical attacks towards journalists pose a threat to the ability of media practitioners to effectively report the news.

H.E. Mr. Thomas Hajnoczi, Ambassador and Permanent Representative of Austria to the United Nations Office and specialized institutions in Geneva reflected on the importance of the UN Plan of Action on the Safety of Journalists and the Issue of Impunity. Endorsed by the UN Chief Executives Board on 12 April 2012 it was prepared during the 1st UN Inter-Agency Meeting on this issue, convened by the Director General of UNESCO at the request of the Intergovernmental Council of the International Programme for the Development of Communication (IPDC). The plan calls for a free and safe environment for journalists and media workers, both in conflict and non-conflict situations, with a view to strengthening peace, democracy and development worldwide. Additionally, the plan called for the formation of an inter-agency mechanism to focus on the safety of journalist while assisting countries to form legislation and procedures to promote freedom of expression and information.

The outcome of the celebration was a call to hold states accountable and make the relevant reforms in order to address the issue of journalist safety and freedom of expression and implement resolutions in their constitutions following the guidelines of the UN Action Plan.

Furthermore, it should fall on the state, as a protectorate, to elevate and illustrate journalism as a paramount institution and service within the state, serving as a reminder that press, freedom of expression, social justice and human dignity go hand in hand.

Namibia is currently ranked at first place on the African continent and twenty-fourth worldwide according to the Press Freedom Index.